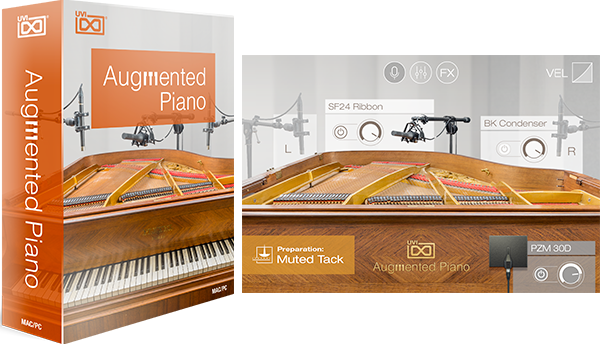 Augmented Piano delivers a unique collection of 24 piano preparations created and recorded on a beautiful 1909 Pleyel grand piano. Ever wondered what a piano would sound like played with a bow, guitar pick or plucked with your fingers? What if you could layer those sounds together with differing attack and decay times? Now you can. 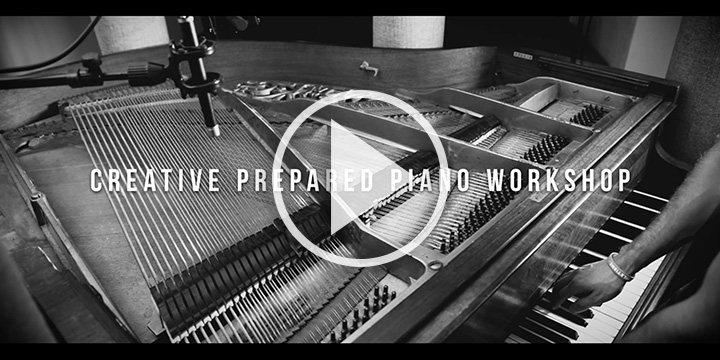 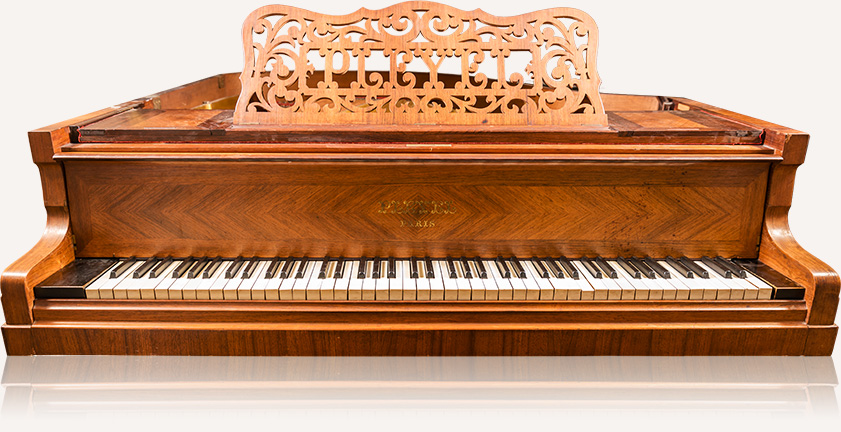 With Augmented Piano we wanted to go beyond traditional prepared piano sounds and offer something both new and inspiring, providing a way for musicians to easily craft and explore new tones and expressive possibilities with an instrument they already know and love. 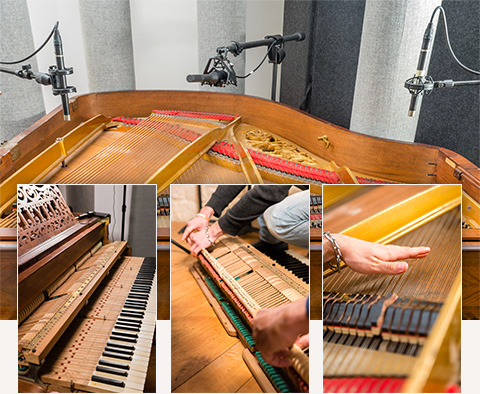 From sustained to percussive, conventional to uncharted, Augmented Piano is a deep-dive into the sound design rabbit hole with a 1909 Pleyel Grand. The result is an incredible selection of 24 preparations, immaculately captured with 3 microphone sets; a stereo Royer ribbon mic, a stereo-pair of BK condensers, and a mono PZM (pressure zone microphone).
Per source, each note was recorded with multiple velocities and round-robins for both the sustain and release sections of the sound. A staggering 23,889 samples were recorded and edited in all, giving Augmented Piano a truly detailed, expressive and natural sound. 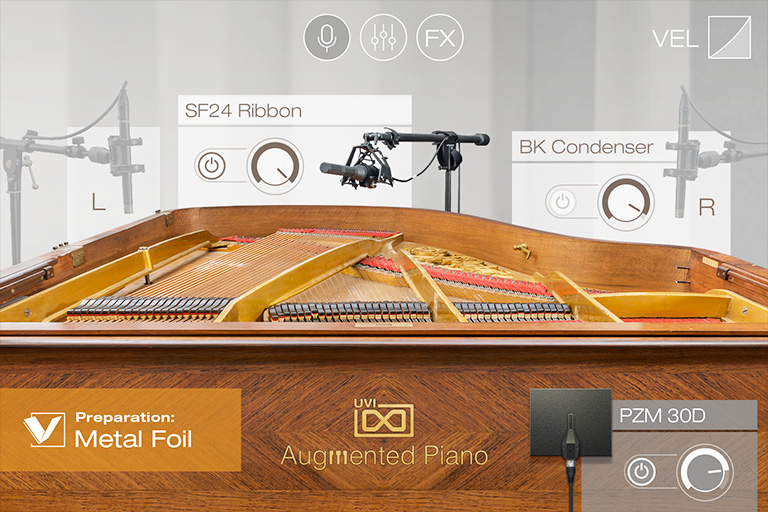 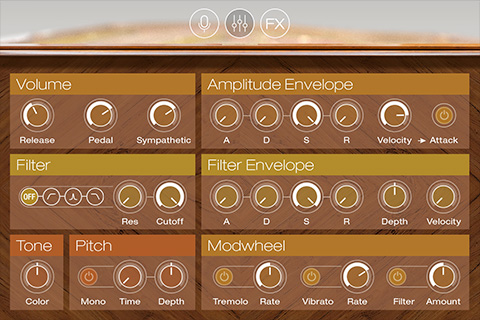 Preparations in Augmented Piano can be used in numerous ways. As dedicated instruments they each have a unique character, from the soft accents of the Brush Slide to the bell-like tones of the Tack, metallic rasps from the Screws to the infinite sustains of the eBow. Thanks to the easy-to-use multi system in UVI Workstation and Falcon, preparations can be loaded as layers to create rich hybrid sounds that would be impossible in the physical realm, for example you could use the attack of a Metal Stick with the sustained Bow sound, or combine the Brush Tap with the muted Finger pluck and add a slight chorus, delay and reverb for an ethereal sound. 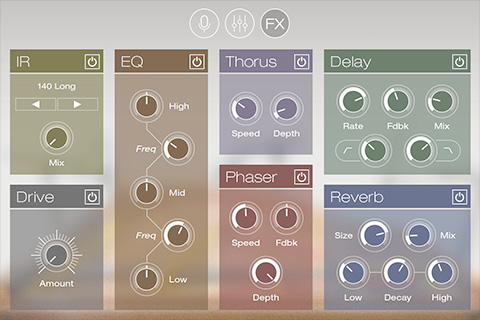 Each of the mic signals in Augmented Piano is presented discretely along with release volume, sympathetic resonance volume and pedal volume, providing absolute control over the instrument sound. The Edit page provides more creative controls typically found on synthesizers including an ADSR envelope, multi-mode filter, filter envelope, tone and portamento. Meanwhile the effects page provides all the essentials, including customizable IR, Drive, EQ, Thorus, Phaser, Delay and Sparkverb allowing for easy placement in the mix or the creation of more unconventional sounds.
A deep instrument, rewarding for both those looking for ready-to-play presets and the experimental-minded sonic explorers out there, Augmented Piano is a versatile and beautiful sounding instrument offering limitless sonic potential.

"Every serious composer, songwriter and producer will be amazingly happy to add Augmented Piano to their tool box of sounds! It will stir up the ‘creative juices’! I highly recommend..."
Wayne Vaughn
Keyboardist, Producer and Composer
(Earth Wind & Fire, No Jazz)

"Augmented Piano sounds wonderful. I'll definitely be using its lush and deep organic textures in my productions. If you’ve ever wondered what a piano sounds like played with fingers or a violin bow then this is for you."
Rik Simpson
Award-winning Record Producer, Sound Engineer, Musician and Songwriter
(Coldplay, Jay-Z, Jon Hopkins, Kasabian)

"UVI did it once again for me! Augmented Piano is one amazing instrument with infinte sonic possibilities. I can’t see myself composing music scores without it. Love it!"
Sam FISH Fisher
Multi Grammy Certified Record Producer/Songwriter & Musician
(Daddy Yankee, Lady Gaga, Celia Cruz)

“It’s hard to imagine that some of these sounds originated on a piano! UVI have clearly thought outside the box with this instrument. This has edge and personality in absolute spades.”
Production Expert

“This is a massive collection of prepared articulations, some I have never heard in a software instrument and it allows for some great customization, while the presets give composers a great starting point.”
Sample Library Review

"Augmented Piano makes a truly great companion to cover the entire range of inspiration you would want from the piano. It is haunting, diverse, fantastically creative, and a true joy to play."
Ask Audio

“This plugin goes so deep.You get all of these interesting sounds you can use in the cinematic and sound design worlds, or even in music productions if you need something that is kooky or crazy but works in a track.”
John Mike

“There’s a lot of piano libraries out there offering prepared effects, but I don’t think I’ve ever seen something quite so comprehensive in one package as Augmented Piano.”
The Sample Cast

“Augmented Piano is truly a unique instrument. The preparations are really inspiring, I just get lost in that happy place where my creative juices keep flowing.”
SoundBytes

“Augmented Piano is truly a unique instrument. The preparations are really inspiring, I just get lost in that happy place where my creative juices keep flowing.”
Rekkerd

“With Augmented Piano you gain access to a phenomenal range of effects and atmospherics piano sounds to transport emotions in a truly musical way.”
Strong Mocha

“The preparations are very interesting, varied and inspiring, as well ‘organic’. I’ve already started integrating it into my compositions.”— Xabilo, Audiofanzine
“The ultimate evolution of prepared piano! I did 100+ layers of all 24 preparations. Imagine what you'll do with it?”— Torley, Twitter
“I really like this Augmented Piano library, plus having the sounds in Falcon is sweet. It’s a beautiful library.”— Simmo75, KVR
“Augmented Piano was an instabuy for me. It is great to have so many different preparations in one instrument.”— Scott_free, KVR
“Sounds incredible.”— Mike M., Facebook
“Inspiring.”— Kristopher K., Facebook