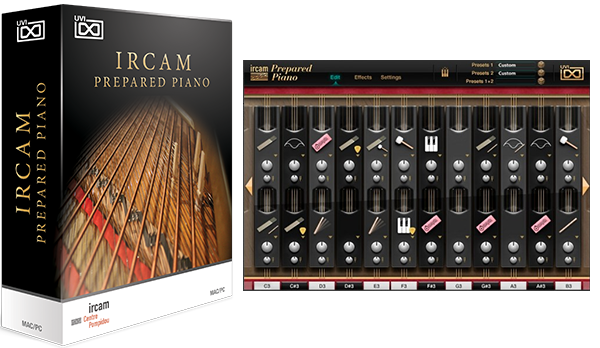 The ultimate virtual prepared piano experience, brought to you by UVI and the renowned IRCAM acoustic research center in Paris. We brought together the world's finest engineers and equipment to comprehensively multi-sample 45 preparations at IRCAM Labs on a Yamaha C7 Grand Piano, resulting in an extraordinarily unique, flexible and inspiring prepared piano instrument. Freely customize your instrument with up to two preparations per note, mix multiple mic positions and quickly explore new sonic landscapes with the randomizer. Try the included preparations or make your own in minutes! 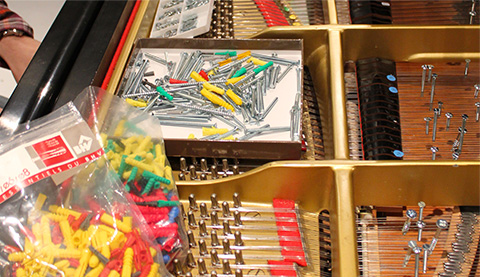 With more than 12,000 samples and 45 preparation techniques, IRCAM Prepared Piano gives you complete control over how the preparations are used and combined. Explore the timbre variety of over 40 different preparation styles. Utilize screws, erasers, coins, clothespins, sticks and more. Excite the strings with a mallet, plectrum, bow or even an EBow. Mix and tune your sound by layering up to two different preparations per note with individual level and pitch controls.

Take complete control of Una Corda, Sustenuto, dynamics and velocity, as well as independent mixing between 2 mic positions. Utilize bar hits, add delay or even Sparkverb™ to give your piano some lush atmosphere, from small spaces to huge ambient landscapes. Intuitive layer controls allow you to customize your layout quickly and randomization provides a great way to experiment with new configurations. 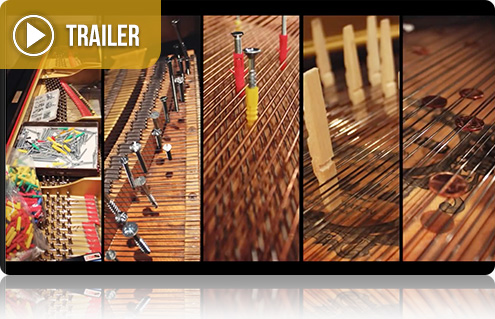 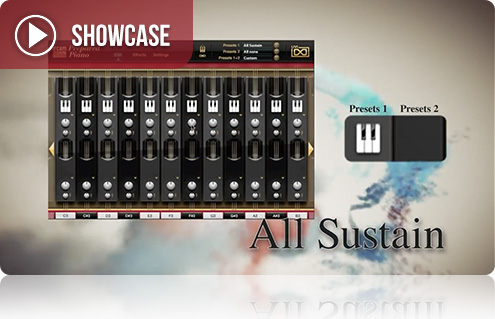 Sustain: A normal piano sound. The strings are struck by hammers, triggered by the notes played on the keyboard. Use of the una corda and forte pedals is possible. There is no object in or on the strings modifying the sound.
None: The ‘none’ preparation setting does not refer to there being no object or preparation modifying the sound of the string, but rather to the lack of sound produced by playing this key - a form of preparation that is impossible without breaking the hammer. This setting can be very useful in preventing the sounding of misplayed notes, or for playing Gyorgy Ligeti’s Etude: Touches bloquées (by cheating, a little...) 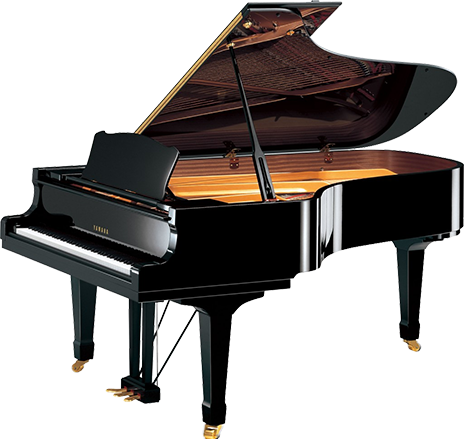 Mallets: The strings are struck with a vibraphone mallet. The resulting sound is similar to a normal key strike, but is slightly softer due differences between the mallet and the normal hammer action.
Wooden Stick: The strings are struck directly using wooden sticks. The attack is harder and shorter. The timbre is similar to that of a dulcimer, and can be activated by pressure on the forte pedal.
Stick Rebound: This setting features the same technique and resulting timbre as the Wooden Stick setting, but allows the stick to bounce on the string after the initial strike.
Muted Stick Rebound: This setting features the same technique as Stick Rebound, but uses the stick on muted strings (see mutes).

Plucking or Strumming the Strings with the Fingers

Pizz: The strings are plucked with a plectrum, one string only per note. This results in a sound resembling that of a guitar. It is a widely used effect, for example by Georg Crumb in Makrokosmos, or by Gerard Pesson in Rescousse.
Scratch: A fast scraping action by the nail along the string. When used on the bass strings, this causes a burst of harmonics. One can hear this technique, in combination with numerous other piano string effects, in Clepsydre by Horacio Radulescu (for 16 sound icons, or pianos installed vertically and played exclusively on the strings).

Bow: Rosin horsehair (a single strand of a violin bow) causing the two or three strings that comprise a single pitch to vibrate. The resulting sound is continuous. Changes in the direction of the bow are always audible and give transient color to the timbre. This effect is sometimes made with fishing line rosin.
Ebow: A small device normally used on electric guitars, causing the strings of the piano to vibrate through a magnetic field. This produces a continuous sound with a masked attack, resulting in a delicate and subtle timbre.

Harmonics: The default harmonic is the octave, activated by finger pressure in the middle of the string. The key is then played normally from the keyboard. It is also possible to transpose this harmonic, thereby simulating any harmonic of the string. A specific digital chord can be played by double clicking on the detune button. This technique is greatly used in solo music, as in Crumb’s work, for example, and can even be found in a transcript of Johann Sebastian Bach’s. 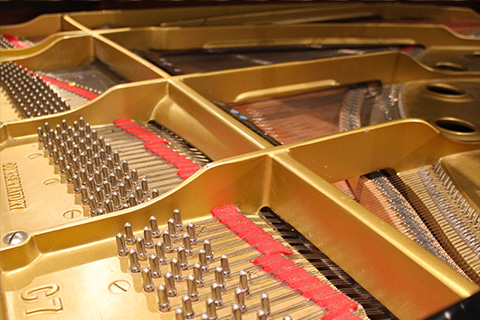 Objects Inserted Between the Strings 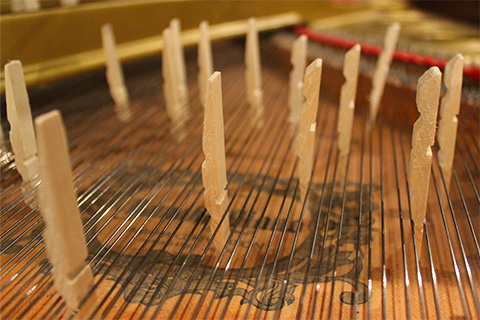 Objects may be inserted between the strings. From the treble keys down to medium bass (F1), there are three strings per note. In this range it is possible to insert one object between strings 1 & 2, and another in the strings 2 & 3.
Similarly, in IRCAM Prepared Piano, you can continue to add several more objects or playing techniques from those available when there are only two strings (F # 0 - E1) or one (as for F0). When the una corda pedal is pressed, only the preparations on strings 2 and 3 are activated, meaning that the pedal is functioning in line with organ techniques.

Rubber: Large pencil erasers are used for this preparation, producing a sound similar to that of a deep bass gong. In the first movement of John Cage’s Amores, three notes are muted with rubber giving a «touches bloquées» effect in contrast to other resonant preparations.
Half Spring-type Clothespin: The half-spring pegs found here represent preparations made from wood. The hardness of the wood used in the pegs results in the production of gong-like sonorities. To simulate preparations using softer wood (which give a duller, dampened sound), half spring pegs can be combined with muted or rubber preparations. Wooden preparations sometimes touch the soundboard, producing a short, hard attack when the string is struck. It is possible to achieve this effect by ticking «add soundboard.»
Screw / Bolt [tapered screw / bolt screw]: The screw, or bolt, is the most common preparation. There are screws of varying lengths and thicknesses, as well as screws with large heads, small heads, tapered heads or un-tapered heads. All of these factors affect the sonic characteristics when applied as a preparation to a piano string. 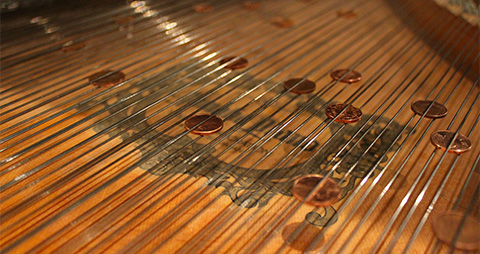 The preparation chosen uses a wide range of materials to create a variety of timbres from one note to another. The sounds are generally rich and resonant; they remain within the gong family, featuring a small vibration when the note is played forte.
All of Cage’s works use at least one screw. Prelude for Meditation contains only four notes, surrounded by numerous silences. Each note in the piece is prepared with bolts in addition to the normal sound of the piano, making it possible to hear the preparations clearly. By contrast, in Daughters of the Lonesome Island thirty-nine keys are prepared, almost all of them with screws, resulting in an abundance of timbres which remind the listener of a gamelan ensemble.

Screw / Bolt + Loose Nut (buzz): The same preparation described above, but with a loose nut around the screw which bounces when the note is played, creating a «buzz». An example of this preparation can be found in the first movement of John Cage’s Amores, where two notes prepared using screws must also be topped with nuts. This work also serves as a concise overview of the preparations Cage employed using mixed materials.
Coins: A coin is inserted between the strings (above 1 and 3 and below 2), greatly enriching the sound. The result resembles a rich yet soft gong, sometimes featuring a very slight vibration. The sound is generally more rounded than when the strings are prepared with screws. The low notes of John Cage’s A Room are a fine example of the use of coins, combined with screws used on other notes.

Objects Placed on the Strings 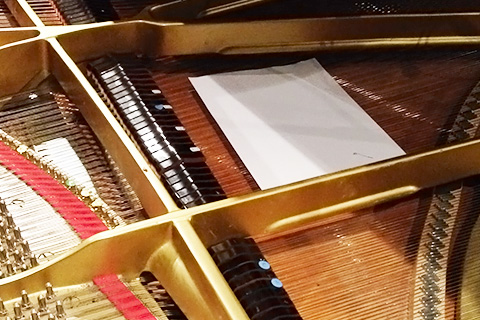 For the following preparations, the string is normally struck by the hammer. Objects can be placed on the strings, altering the manner in which they sound. The ones placed on the strings in this manner would normally affect several notes in succession on a real piano, which is not mandatory in IRCAM Prepared Piano.

Paper: Sheet of writing paper, rolled up and placed on the strings. Its design and the resulting tone echo the bassoon of some pianofortes.
Aluminum: Aluminum foil placed flat on the strings. This gives a fairly long and characteristically metallic vibration. It is similar to preparations that consist of placing metal chains on the strings, as in the first work, Primeval Sounds, in Georg Crumb’s Makrokosmos.
iPhone: An iPhone resting flat on the strings. This gives a slightly metallic damping effect, as well as an occasional bouncing of the iPhone when the strings are struck. This is due to the iPhone not being tethered to the piano strings.
Mutes: The string is dampened with a finger, close to the bridge. This category of dampened sounds includes preparations inserted between the strings, using fabric, felt [Felt Temperament Strip], or window seal, as well as variations in angle that influence the overall time effect of the damping. Studies by Michael Levinas exploit this technique.

Glass Slide: A stemless glass is held on the strings, maintaining constant pressure, and slid lengthwise along them. The glissando is ascending or descending, depending on whether the slide is moving towards or away from the dampers.
Bar Hits: A percussive impact on the bars of the piano’s cast-iron plate, above the soundboard. Three playing techniques are used: the hands, soft drumsticks and hard drumsticks. These samples are played on the lowest bass notes beyond A-1. In Caravan, from Jacky Terrasson’s album Mirror, there is an improvisation using the hands inside the piano frame.
Extra Length: A plectrum slide along the part of the strings located between the bridge and the tuning pins. Since this is an unusual two-handed polyphonic technique, two potentiometers are used to produce this effect. 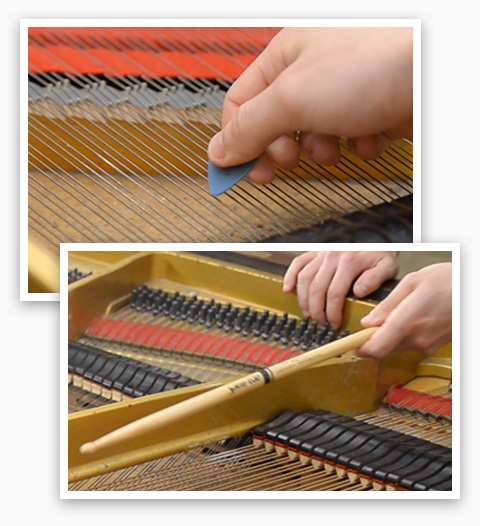 If you're a musician or sound designer who likes to explore the cutting edge of avant garde, IRCAM Prepared Piano offers an experience like no other.

Yamaha and C7 are trademarks of their respective owners. UVI is not affiliated or endorsed by any entities listed here